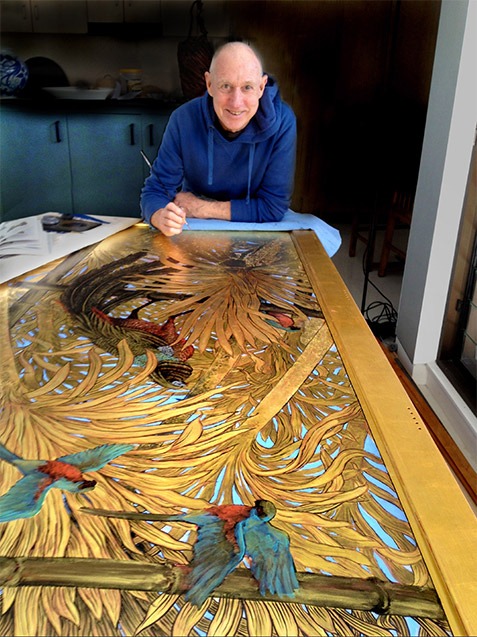 The passion for drawing has been with me all of my life. It is fundamental to all my art and design work.

I follow the classic tradition of drawing from life and nature, either in the studio or outdoors where I observe and record the immediate world around me.

At an early age I was encouraged to follow my intuitive need to draw the landscape, buildings, human activity, fauna and fauna. Allied with this was my inherent interest in architectural structure. This was expressed by building models and designing sets for a miniature theatre.

After leaving high school, I entered a four year Diploma course at the Royal Melbourne Institute of Technology. This training appropriately focused on the traditional aspects of figure-drawing, technique, pure design and art history. On graduation, almost three years were spent as a junior creative director in the Melbourne advertising agency, BCJP.

My feeling of cultural isolation led to a yearning to travel, firstly to Europe, and so began an itinerant life style. which also gave me the necessary freedom to work as an independent artist.

At the beginning of 1964 I settled in Greece, for a period of four years in the ancient village of Lindos, on the Island of Rhodes. From this European base I was involved with drawing, painting and design. I prepared design work for restoration of some early 17th century Lindos mansions. In addition I coordinated all aspects of colour and design for the ‘Looms of Lindos’, a hand weaving cottage industry established in 1965 by an American benefactor, William E Clow.

At the beginning of 1968 I moved to New York to collaborate with the interior design company, Macmillan. I stayed in the USA for almost four years. During that time I made further study, at the Art Students League NYC; spent two summers as resident designer for the Provincetown Playhouse, Cape Cod; illustrated for Mademoiselle magazine and The New York Times; created concepts for children’s books.

My life continues to combines travel with art and design projects which often have a foundation of historical research. I travel to Europe, North Africa, The Middle East, Turkey, Indonesia, Sri Lanka and USA, for periods which sometimes last for many years.

I have now established new studio bases in Europe and Australia.